The following article, written and provided by Roger and Carmela Arturi Phillips, is in memory of one of the greatest miniature artists – Nicholas Hilliard – who died 400 years ago in 1619. At the opening of the 2019 miniature art exhibition of The Hilliard Society in Wells, GB, this interesting lecture was presented and held by Roger and Carmela with a slide show and greatly enjoyed by all guests, members and friends present.

The ICMA is very proud to have permission to publish this wonderful contribution regarding miniature art and it’s history on this website. Enjoy! by Roger and Carmela Arturi Phillips

It is particularly exciting for us to be speaking at the Hilliard Society’s event today, when we are also celebrating the 400th anniversary of the death of Nicholas Hilliard!To begin, it may be helpful to look at the origins of the portrait miniature. The skills of painting miniatures started in monasteries with calligraphy and the illuminated manuscripts of medieval times.These became progressively more ornate and after the embellishment of capital letters, flowers, birds and animals were painted into the manuscripts and then human figures started to appear; at first religious, and then monarchs. Manuscript on vellum showing a portrait of Henry VIII inside the first letter of the script, an embellished “H“

The first portrait miniature was cut out of a manuscript, supported by a piece of cardboard (this was a playing card as this was the only readily available cardboard) and framed as a stand-alone portrait. Painted by Jean Clouet c. 1535 Watercolour on vellum, 35 mm dia.. Cut from a manuscript by the artist For the last few centuries, not much importance has been placed on Hilliard‘s work and his reputation has been overshadowed by other artists. Very recently, however, in-depth research has been done and Hilliard‘s legacy has been reappraised, resulting in two exhibitions on his work in London, one at the private Philip Mould Gallery in Pall Mall, and one at the National Portrait Gallery, which has just ended. A catalogue is available for both exhibitions, and there is a biography of Hilliard by Elizabeth Goldring, which has been much acclaimed. Hilliard, and his pupil, Isaac Oliver, have now been crowned as among the greatest of British artists producing some of the finest work of the English Renaissance.

Nicholas Hilliard was born in Exeter, the eldest of four sons of a goldsmith and descended from many goldsmiths before him.The family’s income would have been comfortably adequate but they had no social standing to speak of.It was usual for goldsmiths to be fluent in England and Latin, but we don’t know whether Hilliard ever mastered Latin, as his education would not have been consistent.

It is very unsatisfactory that we do not know the how, when and where Hilliard trained to be an artist.We do know that his family sent him abroad for four years, when he was about 8 years old.Firstly, toGermanyand then toGeneva,Switzerland.The artistic communities where he stayed would have been far larger than inEnglandand he would have met artists and seen magnificent artworks that would have inspired him.We can only guess that he was artistically gifted and that he received training during this period abroad.He returned toEnglandwhen he was about 12, and helped his father in the goldsmith business. When he was about 14, he was apprenticed to aLondongoldsmith called Robert Brandon from 1562 to 1569, who was very well connected, being the goldsmith to the monarch, Queen Elizabeth I.It was here that he met the boss’s daughter, the beautiful Alice, and eventually they married in 1576. Hilliard’s first known miniatures date from the early 1570’s, when he would have been in his early to mid-twenties.He continued to work as a goldsmith for the rest of his life, but his real love was painting.He worked on large scale as well as in miniature, but it was the latter that caught his imagination, describing limning as ‘a thing apart’. His miniatures were instantly successful and he was soon painting Queen Elizabeth herself and members of her Court.Interestingly, in his day, artists were of very low status and were ranked the same as house painters, or any other artisan.However, with his miniature painting, Hilliard elevated his art to the status of a gentleman’s pursuit and made sure he lived and looked the part! Unfortunately, doing so meant he lived far beyond his income and his life was plagued by debt. Coupled with some risky investments, he ended up in the debtors prison. As a person, accounts of his nature by his contemporaries were less than flattering. Although it was acknowledged that he could be charming, he was criticised for being unreliable, extravagant, putting on airs and for being a liar! We also know that he had gout in his later years.

It was thought that he probably spent time in Paris to escape his debts and it was during this time that he painted his self-portrait and the portrait of his wife, Alice, two of the few miniatures that he signed.Whilst inFrance, he painted Henry III. This miniature was recently sold in a French auction ‘for a song’, as they say. The new owner took it to theLouvreMuseumfor identification and it was labelled ‘FrenchSchool’. At this point, British scholars caught sight of an image of it and realising that it was a previously unknown painting by Nicholas Hilliard, they travelled to Paris to see it.It was repatriated toEnglandwith much cloak and dagger secrecy, with officials at the Louvre attempting to put a block on its export, but failing.It is now in a private British Collection. It was believed that about 200 miniatures by Hilliard survived the 400 years since his death.However, many of these are old attributions, and recently scholars have identified the defining details of his work and so it is probable that there are far fewer remaining examples than was previously thought.To add to the confusion, many of his works have been retouched, some of them several times, so that there is very little ‘Hilliard’ left.

Hilliard had three known pupils and he would also have taught others, many of whom would have been amateur artists who wished to learn as a gentlemanly pursuit.One of his pupils was his son, Lawrence, whose talent did not match that of his father.Very few ofLawrence’s miniatures survive.The second pupil was Rowland Lockey, whose name we know from contemporary records.However, there is no signed work by him and so the small number of attributed works are unreliable attributions. Hilliard’s third pupil was Isaac Oliver, an immigrant from a Huguenot family, so brilliant an artist that he eclipsed his master. 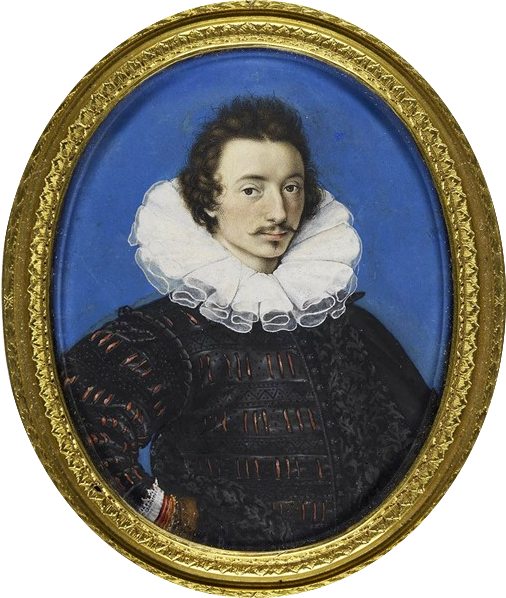 Isaac Oliver was singled out by contemporaries, along with Hilliard, as the most famous limners of their time in bothEnglandand on the continent. He, in turn, taught his son, Peter, and he too became just as fine an artist as his father. 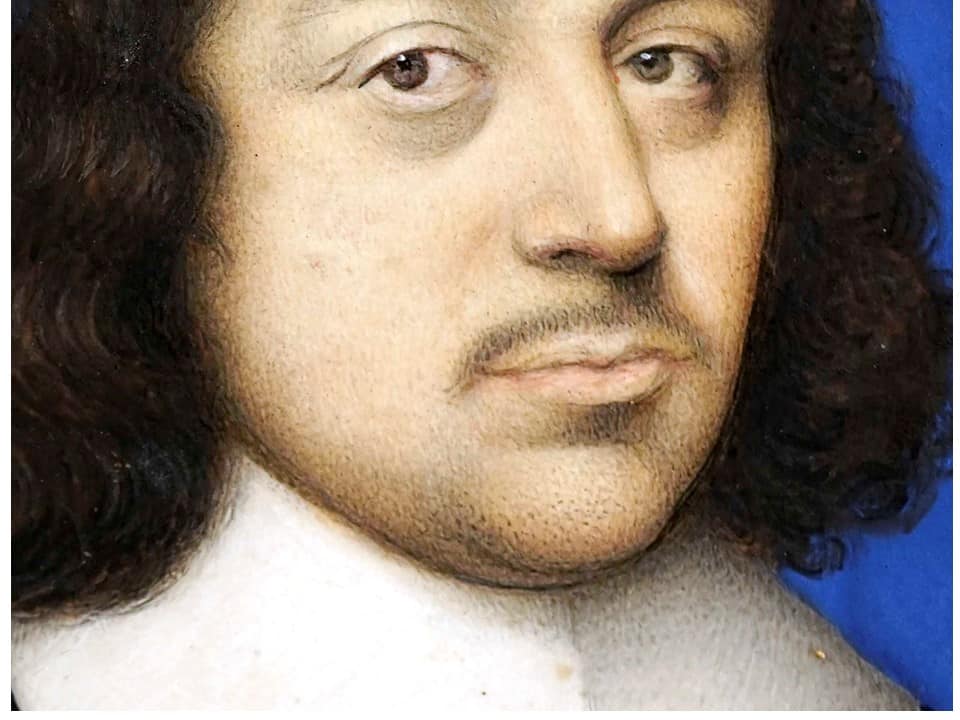 After a brilliant lauded career, Nicholas Hilliard died in London in January 1619, alone, broke, a pauper. His legacy lives on, not only in his masterful surviving works, but perpetuated by miniature painters today, using the same skills and often the same materials. 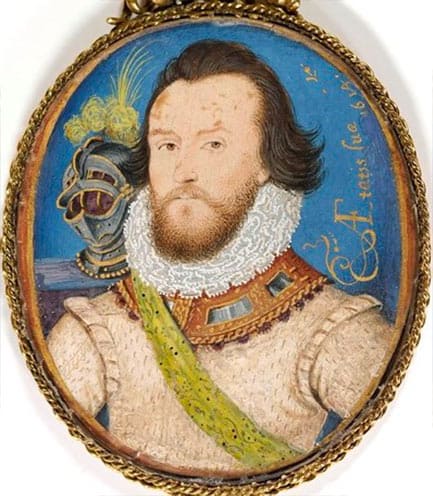 Nicholas Hilliard
Self–portrait painted 1577 when he was 30 years Watercolour on Vellum, 41 mm dia.